When you buy a Commodore SX 64, sometimes the keyboard cable is missing.
This is a issue as the cable doesn’t have standard connectors.
while the BD-sub 25 connector pinout fits, the commodore connector, the housing and mounting holes at both sides won’t fit.

a lot of users that are missing the cable are building one with flat cable connectors and “shave” off the “ears” of the connector, to make a replacement cable that fits.

flowerking published a 3d model of the connector that could be printed on Thingiverse.
scottpav enhanced the design so the plastic from a normal connector could be used inside the 3d printed shells
Since I also own a SX 64 without cable, I decided to order the connector parts. (JLCPCB as an shop that sells 3d printed objects). 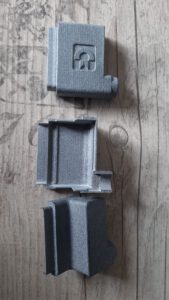 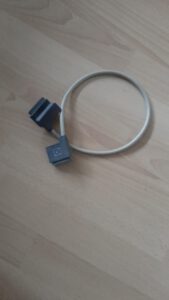 so after uploading the design, JLCPCB returned with a remark that thickness was less than 1mm and that could be an issue in the end result.
I took responsibility as thicker shell would probably not fit.

after 2 weeks, I received the connector shells.
I started soldering the cable to two 25 pin DB-sub connectors, and removed the metal shield from the connectors.

Then I assembled the connectors with some hot glue, and tested the end result.
The cable worked as it should, and is much better looking that the flat cable solution.