As I have the 1541 Ultimate II cartridge and not all software accepts to be loaded from device other than number 8, I decided to create a device number switch.

So I started to look around on the internet and found a nice solution on a Dutch forum.
It doesn’t only let you switch between device number, it also let you hide the drive from the computer.

It only needed a 3 pole 4 position switch.
But as I want my SX-64 to be returned in factory state, I also added some connectors and chip sockets to avoid cutting wires.

How it works…
On one of the VIA’s there are to pins, both pulled low by a connection to the GND line. 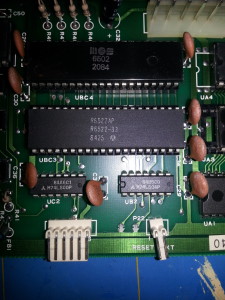 Cutting a trace on the circuit board (pads near connector P22) of one (or both) of the pins would change the device number (at reset).
I lifted the VIA and inserted a Chip socket with wires attachted to the pins 1 (GND), 15 (PB6?) and 16 (PB7).

the other side of the wires, I mounted on the switch.
Now the address of the drive can be selected.
Now to hide the device from the serial bus I disconnected the internal serial cable to the floppy drive board and created a little connector extension that feeds all signals 1:1 through. 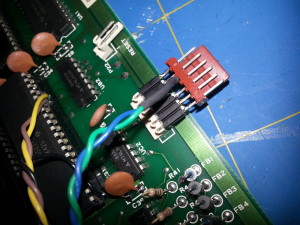 But one signal (pin4, ATN) is cut, and is also routed to the switch. 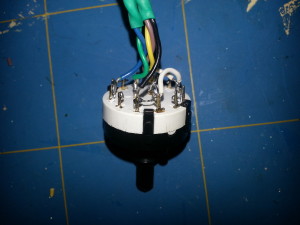