To improve the quality of the video output I decided to create a s-video output.
The modification is nicely described on the sleepingelephant website so I don’t go in detail.

First I removed the mainboard from the VIC 20 and searched the correct components, a 0.1 F condensator and a 75 Ohm resistor (I took 2 150 Ohm resistors and placed them in parallel of each other). 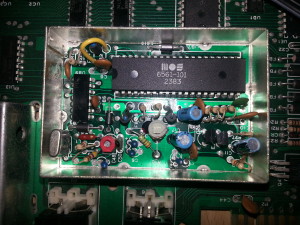 I Removed the two components that were not needed anymore, and replaced them with the new components. 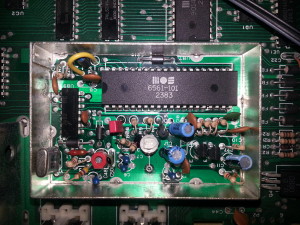 Next I cut some traces and connect pin 4 of the connector to the new chroma signal.
I cut not only the 2 traces in the video circuit but I also cut the power supply line so I’m sure I don’t fry something when using the wrong cable. 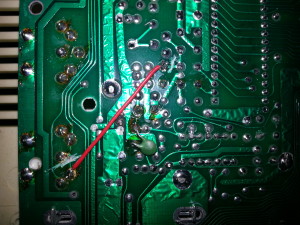 the two cuts and a wire bridge.

The cut powersupply at the video connector (right connector on the photo).

The image is more clear now, but the mod disables the normal output, so there is no support for tv/monitors without s-video.