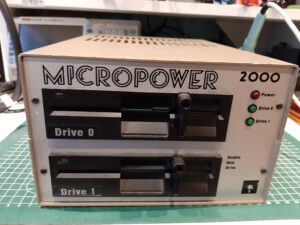 Over a year ago I bought a strange Dual floppy drive.
The drive is called Micropower 2000 and was build by “Analog Digital”.
On the internet I couldn’t find a lot info, I only found some info on the website of Richard Lagendijk <Here> . 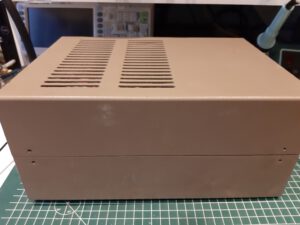 He also had a hard time getting more info on the drive.
The difference between our drives are the markings on the front of the drive.
First I thought it could be a prototype of the MSD SD2 As the drives have a lot in common.
To test I programmed 2 eprom’s with the firmware of the MSD and placed them in the drive, and it still functioned. 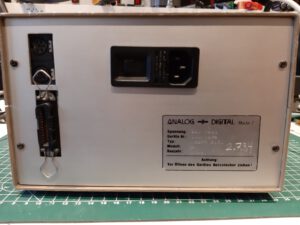 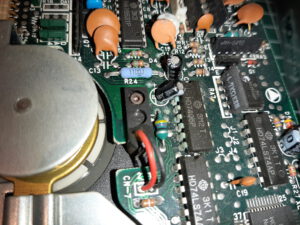 On use the drive is responding and loading most floppies, but has some issues while formatting and loading of long files.
As the Micropower 2000 uses the same drive units I searched the web and ended on the page of Ray Carlsen <Here> and found that the drive units have capacitors that will leak over time.
After disassembling the drive I could clearly see some corrosion on both drive units.

I ordered a new set of capacitors to replace them, and will start replacing them soon.
Other things that needs to be done is: